Welcome to the story of the ping pong flight an often overlooked event in the history of aviation.

An exhibition has been built  along with this site to depict the main incidents which took place during the journey .Pictures of the mural panels are placed below and you can scroll down them and  read a short description of the flight and the men who made it happen

Facts covering the flight can be seen by clicking on the titles at the top of this page.

The flight returned via Merseyside, England ,  where this project was created and is based .The exhibition was shown in Wayfarers Arcade ,Southport to remind people of the part the town played in this historic event. 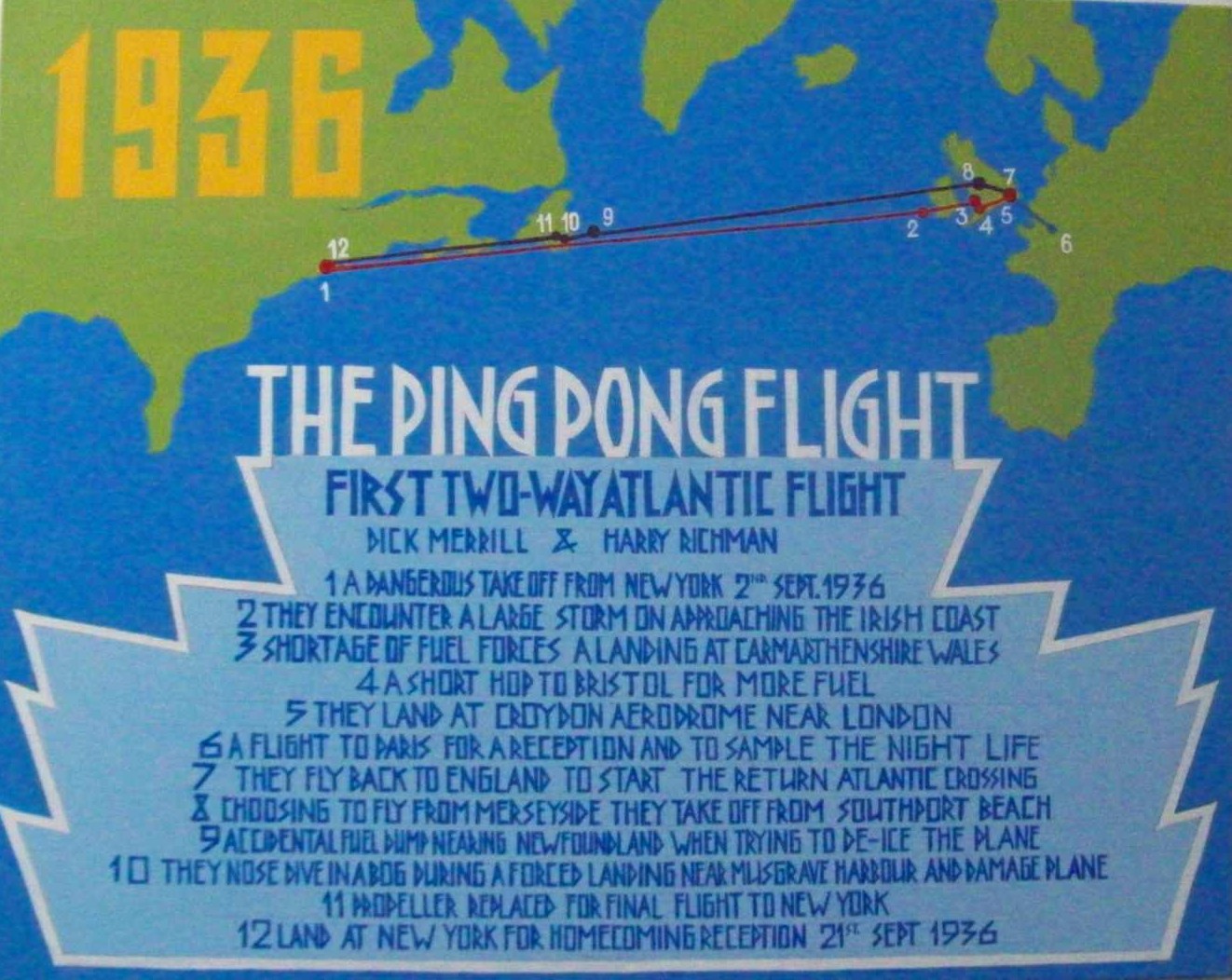 This stylized map displays the route of a most remarkable flight made by a modified Vultee V1-A aircraft in September 1936.

Funded by the famous entertainer Harry Richman and captained by `Dick` Merrill on leave from eastern Airlines.The attempted flight had been from Floyd Bennet Field , New York , which is now part of a U.S. National Park ,  to Croydon, London, returning the following day but this had not transpired . Clearly this modified  but never the less extended flight remained a great achievement and had a large influence on the future of aviation .

A CLUB IN MIAMI

Clearly from the map, it was evident that it was going to be an altogether different

club where Richman was entertaining

Captain Dick Merrill the popular pilot (DC2s) at Eastern Airlines had achieved much fame from his previous exploits - from the Barnstorming days to Postal Services (with impromptu aerobatics frequently included) To a variety of long distance rescue missions. And yet he had not flown the Atlantic. Not for want of trying, but on his earnings this cherished dream had not been feasible.

Two offers of subsidy had not materialized.

Then early in 1936 the famous and wealthy entertainer Harry Richman decided to boost his own modest aviation ambitions by acquiring a modern plane a Vultee V1-A Merrill had at once recognised that the plane would be capable of an Atlantic trip, and decided to call in on Richman. As he suspected Richman would be up for it and tentative agreement was reached.  Merrill would do the essential flying and Richman would fund the enterprise .They called the aircraft `Lady Peace` to promote peace .

"Fly from New York to London, refuel and return the next day". Merrill suggested .The two-way Atlantic

trip had not been done before .Such was the plan and preparations began in earnest.

Richman , the co-pilot ,was keen to use ping pong balls as a flotation aid ( also used by the R.A.F. in the 20`s ) although Merrill , the captain ,wasn`t too keen but went along with the idea . Later in life by then of legendary status , he would recall good humouredly that many persons he met remembered him mostly for carrying 40,000 ping pong balls across the Atlantic .Henceforward the flight was known as the `Ping Pong Flight`.

At 4pm on 2nd.Sept.( after waiting for clear skies from the previous day ) they emerged from the hangar and made towards a small crowd for last minute farewells and good luck

wishes to add to the bundles already collected ( including Amelia Earhart`s ). Finally Merrill started the engine with its customary roar, and slowly moved onto the runway which stretched from Flatbush Avenue. At the Eastern end Merrill turned to align for take-off. Final cockpit checks completed with oxygen available , Richman lowered the wing flaps as Merrill slowly eased the aircraft into its take-off run .From the sluggish start the plane started to gather speed more rapidly .

Passing the hundred mark , Merrill adroitly corrected a sudden dip by the starboard wing and the plane now approaching 130mph lifted and skimmed over Flatbush Avenue .Nearby spectators on the airfield ducked anticipating the returning aircraft but Merrill climbed steadily curving onto a course over Long Island.

To their surprise they were joined by a couple of DC2s , one on each side as Rickenbacker (straw hat and all) and staff waved their farewells before returning to their duty at Newark.

Climbing steadily the pilots set their course for Newfoundland and the Atlantic , away from the setting sun into twilight.

As the Vultee flew east following the ` Great Circle ` route ,which would later be used by many commercial airlines  the two pilots used their early form of radio direction system to check progress but as they began to approach the Irish coast a huge thunder storm lay in their flight path reducing visibility and the primitive system`s efficiency . They became lost and low on fuel and had to look for an emergency landing place.

Through a break in the clouds they saw a flat field close to a range of hills , which they mistakenly thought was Scotland , and managed to bring down the Vultee safely just missing a herd of cows and an irate farmer . The local inhabitants crowded round the silver aircraft and made them welcome by bursting into song and the two men realised they`d come down safely in Carmarthenshire , Wales almost out of octane 100 fuel.
The local Welsh villagers were most helpful and although near a garage they still had to head to Bristol to pick up more of the special avgas to take them onto Croydon . They had just broken the speed record for crossing the Atlantic in one direction and wanted to celebrate in London.
As London marked the first half of the record attempt they decide to take a longer break and fly to Paris to sample the night life which rather upset the 48 hours `there and back` idea of the flight but the Parisians  gave them a hero`s welcome which added to their celebrations in the clubs and bars of the French capital .
On returning to England they headed up to Merseyside for the return Flight back to America but found the prevailing wind at Liverpool airport unsuitable and the decision was made to try a dangerous take off from Southport beach  then in Lancashire . The take off from a treacherous sandy surface had to be made after dark and the local townsfolk helped set up a flare path and clear a strip for the attempt . The overloaded Vultee roared into the night sky in front of a large crowd of onlookers and headed out over the Irish sea on its return trip to New York.
As they flew out over the Atlantic and started to near the U.S. coast Dick Merrill realised that the wings had begun to ice up and decided to lower altitude to clear them .
Dick declared he was going down and Bert Richman mistakenly thought he was ditching and proceeded to dump their remaining gas into the sea . They then had for a second time to make a forced landing at the town of Harbour Grace in Newfoundland in a marshy area and the aircraft sank into the soft surface damaging the propeller . The plane was hauled out of the bog again by helpful locals  and the propeller replaced along with other repairs.
After refuelling to replace the dumped Octane 100 fuel they set off on the final leg of the journey , a lot less dangerous than the two way Atlantic flight which they had just completed , flying down the U.S. coast to their starting point.

They reached New York on the afternoon of 21st. September 1936 landing at Floyd Bennet Field where an Air Society timekeeper signified the Trans Atlantic return of the VulteeV1-A named `Lady Peace` captain Dick Merrill had been somewhat delayed from the original intent of an Atlantic crossing from New York to London returning within 48 hours ; rather than the nineteen days in reality, the flight was an outstanding achievement .Included were the Transatlantic records from New York to Carmarthenshire , Wales ,and Southport , Lancashire ( in 1936 ) ,to Newfoundland .

Crossing the Atlantic both ways had created one of the most astonishing flights in aviation history  . Later to be known as the` Ping Pong` flight owing to the 40,000 table tennis balls on board to be used as a flotation aid in case of ditching.